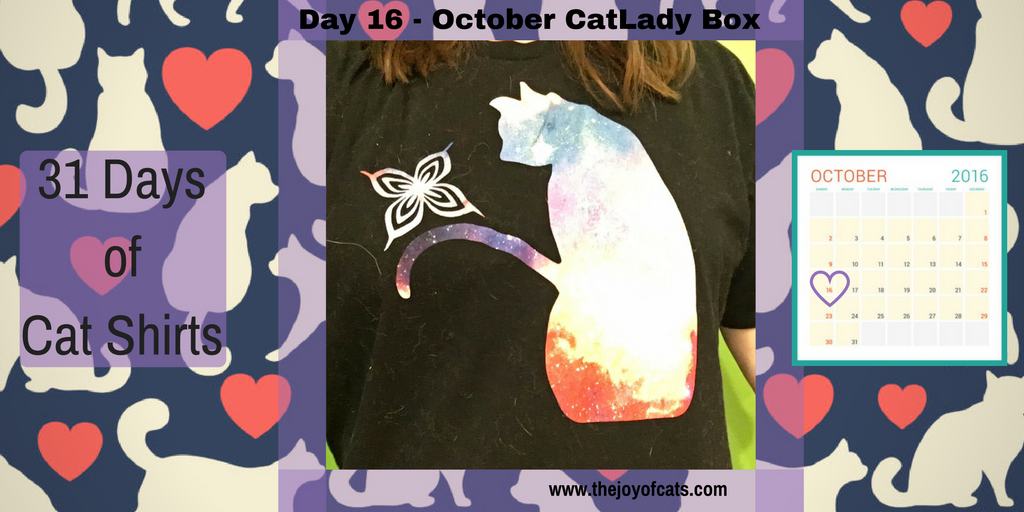 Today's cat shirt features the cat from Bleach. Bleach is an anime. I haven't watched it myself. The shirt was a surprise gift from Ted. The shirt is sold exclusively from Crunchyroll. In the anime, one of the characters transforms into a cat.

I have received many compliments on this shirt as the cat design is beautiful. I choose to wear it today, as it is Sunday and is a nicer looking cat shirt to wear at church. Even people who typically do not like cats, like this shirt!

October 16 is national feral cat day. We fed a feral cat for a couple of years or so in our yard. It's quite possible that he was related to my Buster as they had similar coloring (markings) and were both ear tipped.

Ear tipping indicates they had been through a Trap-Nueter-Release (TNR) program. The cat is captured, taken to a clininc, nuetered, and then released back where it was taken. This has been proven to be the most effective way to support feral cats. Feral cat, Other Buster, in February 2014

We called our feral cat Other Buster. He had no interest in coming inside or letting us pet him. Once, he let me come within 2 feet of him. Usually, he maintained a 5 foot rule.

Ted built a cat house to provide shelter. We also had a straw fort that was larger on the deck that winter since it was so cold. On the last day we saw Other Buster, there were 2 other cats with him in the fort.

When Violet came to our yard, she was semi-feral. She was probably abandoned. When she brought the kittens to the yard, they were feral and would scatter immediately. I was able to socialize them that summer and get them all of the street!

Here are some resources for helping feral cats:

Wearing a cat dress to church