Note: This post contains affiliate links. If you use the link and make a purchase, I will receive a commission.

In the spring of 2017, I went to a window to close it to keep the rain out. When I gazed into the backyard, I saw some kittens!

There were kittens huddled in the old wooden cat house that my husband had built for a feral cat that had since moved onto different territory.

Within a few days, I spotted five kittens and a tortie mom cat. We were not feeding any outdoor cats at this time, and she may have chosen our yard due to the shelter that was available (ample space under the deck).

I learned that the mom cat’s name was Chloe, and she was previously fed by a man that lived ten houses from me.

And Chloe was feral. My attempts to socialize the kittens while they were outside were not working. They didn’t trust me since their mom didn’t.

So I got some help through the Alley Cat Allies Feral Freinds Network to trap the kittens (mom cat was trapped and fixed a few weeks later). I used a cat playpen to contain the kittens while I socialized them.

Below, I will describe several uses for a cat playpen. There are many playpens available, but I’ve only used the Jespet 61″ playpen.

The playpen setup is about the same for all the uses, so I will include the setup process and tips at the end of the post. 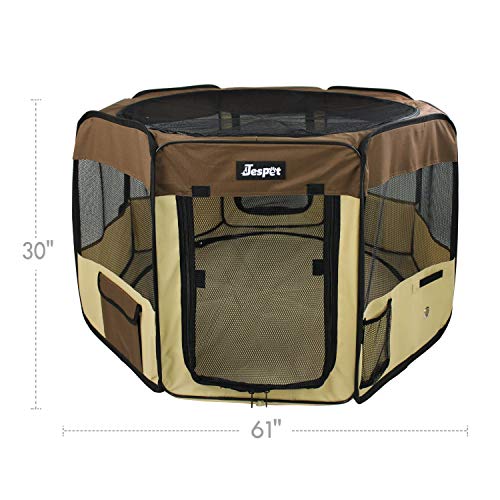 A cat playpen can be used to contain kittens when fostering them.

When a friend of mine had a friendly stray with kittens in her shed, I put the mom cat and the kittens into the playpen.

In this case, the mom cat was very friendly. She allowed me to handle the kittens. And we kept them for a few weeks until a rescue was able to take them in.

We placed a cat carrier inside the playpen for her to use a den for the kittens.

Every couple of days, the towels were swapped out with clean towels.

Also, for safety, while the carrier was in the playpen, I removed the door. This way, there wasn’t any risk of the mom cat not being able to get to the kittens in the carrier (if she were to have bumped the door closed).

As mentioned above, my first time using a cat playpen was to social feral kittens.

I set up the playpen in the garage (with cardboard underneath it). The kittens were initially scared of me, so they didn’t try to escape the playpen when I opened the door.

The kittens were also eating independently, as I let them stay with their mom outside until they were big enough to be weaned. They were about 2-3 months old.

Older kittens are harder to socialize, so in retrospect, I should have trapped them when they were a little younger.

The playpen was large enough that I could get inside of it to be with the kittens. At first, they wanted to hide from me, so it was easy to get in. I would not have been able to do this if the mom cat had been in the pen with them.

You can read Kitten Lady’s instructions for how to socialize feral kittens here.

If you are fostering a feral mom cat with the kittens, watch this video.

3. Fostering of an Adult Cat

The playpen is spacious enough to hold an adult cat for a few weeks.

It may be okay for long-term fostering as well, but I haven’t used a playpen for that purpose, so I can’t really say.

There have been a few times where I use the playpen to foster a friendly cat. The cats were strays that showed up at my house or a friend’s house.

The cats were likely abandoned or lost and seemed too friendly to have to endure outdoor cat life.

Or when Chester showed up in the winter, he was probably didn’t have a thick enough winter coat to make it through the winter (even with shelter).

I used the playpen to hold the cats until our local Humane Society had space to take them in.

4. Helping a Cat (sick or for other care)

When Charcoal, one of the cats in my yard, was sick, he was placed in the playpen for a week.

Charcoal needed a liquid medicine twice a day for a week. If he was outdoors, he would have stopped coming close enough to be able to give him the medicine.

We developed a routine with the playpen, where he would come to the door to be petted, and then I was able to give him the medicine followed by cat treats.

There was also a time where I trapped a feral cat in my yard that needed a broken/infected tooth removed.

The cat, who I called Fluffy, was neutered at Humane Ohio. When they fix the feral cats (or maybe any cat), they mark on the form any problems with the cat that needs to be seen by a full-service veterinarian.

My vet was able to remove the tooth, but not right away. So Fluffy stayed in the playpen until surgery day and then for a bit afterward while he recovered.

Fluffy never returned to my yard but eventually made friends with the cat feeder that lived ten houses away.

The playpen can be set up outside on a deck or in the yard to be used by an indoor cat.

I have not done this with any of my indoor cats, but I have seen other people use it to give their cats some outdoor time.

My fear would be the cat escaping in between the house and the playpen. Although, I suppose the risk could be minimized by transporting the cat in a cat carrier or having the cat on an escape-proof leash designed for cats.

The Jespet playpen is easy to set up. The top and bottom pieces zip off and on.

The pen is large enough for a litter box, cat carrier, trap (for feral cats), food and water bowls, and blankets.

You can see Charcoal in the pen in the video below, and I show the inside as well.

A cat playpen can be used to foster kittens, cats, or help a cat that is sick or needs other care.

My experience has been with the 61 Inch Jespet playpen, which you can get on Amazon or Chewy.