Using a cat drop trap can take a bit of practice.

I recently needed to trap Pork Chop, one of the feral cats that come for food in my backyard. He had a hematoma on his ear, so I wanted to examine a veterinarian.

Since Pork Chop had been trapped previously in a regular trap when he was neutered and ear-tipped, I didn’t think he would quickly go into a regular trap again.

He may have gone into a regular trap if he was hungry enough, but I suspect he has another food source, and also, I don’t like to withhold food in the winter.

ALL OF MY TIPS are based on using the DT1 Drop Trap and a regular Tomahawk cat trap model 608NC.

I am pointing out the models I used, as the back door of the regular trap is the right size to align with the transfer door on the drop trap. Be aware that traps can come in different dimensions, and not all traps have a back door that slides off.

Note: this post contains affiliate links. If you click a link and then make a purchase, I may receive a commission.

The Cat Traps I Used

The traps are also available on Amazon. The DT1 is here and the 608NC here. There are shorter versions of the regular trap available and also transfer cages, but I prefer the 36 inches model as it gives the cat a bit more room, especially when they may be spending a night or two in the trap.

You may want to compare the prices the day. For example, the day I wrote this post, the cost was less on Amazon for the regular trap, but the drop trap would have been less when ordering directly from the Tomahawk website.

Also, if you purchase directly from Tomahawk, you will have the option to have the trap powder-coated, which can protect the metal. I choose this option, which is why the traps look black instead of silver in the pictures. 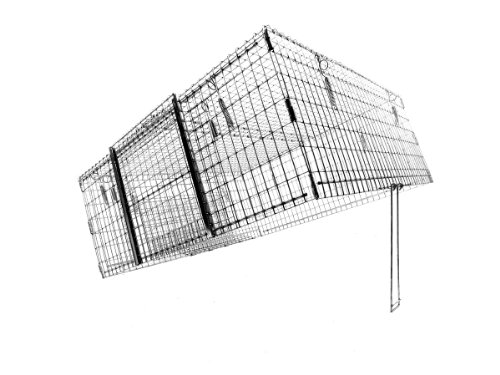 The Drop Trap looks large in the picture above. I didn’t realize that there was a right way to fold up the trap until using it for Pork Chop.

The trap is collapsible for easier storage and transport. You can watch the Tomahawk video that shows how to set up and take down the drop.

Be as Prepared as Possible

If you are using a drop trap for the first time, I encourage you to be prepared as possible.

While the concept of a drop trap is straightforward, once the cat is trapped, there is a good chance that it will panic, jumping around frantically to try to get out of the trap.

Remain as calm as possible and move quickly once the cat is trapped to cover the trap, which should also calm the cat.

Watch YouTube videos, such as this one, and read ALL of the instructions that come along with the DT1 trap. You can read them online here.

Neighborhood Cats has a short video and a PDF with drop trap instructions here.

The tips below are aimed at helping you after you know how a drop trap works.

Before using a drop trap for the first time, I recommend setting up the drop trap and getting a feel for how it works.

Also, you can practice covering the trap as quickly as possible with a sheet or blanket that completely covers the trapped cat.

If possible, do as much setup and practicing while the cat that needs to be trapped isn’t around. Cats are smart and will notice new things or routine changes.

The drop trap can be set up a few days in advance so that the cat gets used to eating under it. However, I would not leave the drop trap unattended if you are concerned about the trap being stolen.

The food should be placed in the exact center at the back of the drop trap. The cat’s ENTIRE body needs to be under the trap before the string is pulled to trap the cat. This reduces the chance that the trap will land on the cat’s tail or body.

The food dish should be plastic or unbreakable material and will not injure the cat if it gets bounced around. Or you can use a paper plate. I used a Beco Food Dish.

DO NOT let the cats eat directly from metal food tins of any kind, including tinned wet cat food, sardines, etc. Cats can cut their tongues on the rim of opened metal cans.

You can use a grabber reacher tool to push cat dishes to the back of the trap while it is set up. I found this much more manageable than reaching in with my arm or removing the weights from the weight flap to slide the food in from the back.

Below, you can see what the tool looks like. That tool is available on Amazon and looks nice! However, I got a similar tool (probably of lower quality) at the Dollar Tree for $1.25. 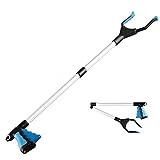 So if there are other cats around, you may need to place extra food under the trap so that any cat can still eat while waiting for the right cat to go under the trap.

Or, you may be able to use some trickery, depending on the situation. For example, when I dropped Pork Chop, Midnight was the only other cat around. So, I was able to give Midnight (who is feeder friendly) a meat tube snack away from the trap while waiting for Pork Chop to be lured under the trap by smelly sardines.

The Transfer to a Regular Trap or Transfer Cage

Stay as calm as possible and move quickly once the cat is trapped to cover the drop trap completely with a sheet or blanket. Also, place the heavy object on the trap (or a second person can use their foot) to secure the drop trap while setting up for the transfer.

Once the cat is trapped (and the drop trap is completely covered by a sheet or blanket), it will need to be transferred to another trap or cage for transport.

I only use a DT1 Drop Trap and a regular Tomahawk cat trap because they are designed to work together. The back door on the trap lines up with the door on the door trap.

Secure the drop trap by attaching the springs on the drop trap to the regular trap. Then the transfer can begin. DO NOT SKIP THIS STEP.

If you are using another trap or a DIY cat drop trap, please be sure to follow the instructions that came with it.

The most important part of the transfer is making sure doors on both traps line up, and there isn’t a large gap, as you do not want the cat to be able to escape.

Be patient with the transfer. Remember that the cat is terrified.

In general, there are two ways to get the cat to move out of the drop trap:

It can take some trial and error. If the begins to panic, cover both traps completely and let the cat calm down for a few minutes before trying again.

You might want to use animal handling gloves or welding gloves if you have any concerns that the cat may get you through the cage.

Once the cat is in the transfer trap (or cage), close the door on the trap. Ensure the door is secure before removing the springs attached from the drop trap.

What if you trap two or more cats in the drop trap?

I have not dropped more than one cat in the drop trap.

My understanding is that if you drop more than two, you can use a trap divider to separate them once they are in a regular trap. The Tomahawk drop trap instructions have pictures that show how to do the separating.

A drop trap can be used when a specific cat needs to be trapped or for cats that will not go into a regular trap.

My cat drop trap tips will hopefully help you succeed in trapping the cat with the least amount of stress for you and the cat. Move quickly and stay calm once the cat is trapped.

Being as prepared as possible is best. Watch videos to learn and see techniques. Practice using the drop trap when the cats are not around. And have all your supplies nearby on trapping day.