My outdoor cat died at the end of January 2021. His name was Charcoal.

While I called Charcoal my cat, he was a community cat and may have had other places where someone was feeding him.

Writing and sharing about my cat that has died helps me with the grieving process.

Over time, Charcoal eventually relaxed, and I could pet him and take him to the vet. He was also best friends with, Midnight and Pork Chop, who are other cats that I feed in my backyard. Sadly, Midnight died about three months after Charcoal.

During the last week of December, I noticed that Charcoal might have had a cold. I thought maybe he did, but I wasn’t entirely sure.

When I saw him that day, it was not at a usual feeding time, so he would not let me get close. His typical behavior was to only allow petting at breakfast time or during evening hangout time before receiving dinner or treats.

So, I was not concerned that he was avoiding me. And I decided to try for a closer look the next time I saw him.

Only, I would not see him again for a while. When the weather first turned cold (in November probably), Charcoal started spending more time in the shed for the outdoor cats. He stopped coming out for the evening can of wet food. And then he wasn’t waiting for breakfast.

Looking back, this routine change was a sign that he may have needed vet care. When Charcoal was sick during the summer, I was inspired to write about how to help sick outdoor cats.

But I justified seeing him less, as it was cold. And on nights when it’s freezing, the raccoons usually do not visit, so there is plenty of dry cat food available at all times in the food shelter for the cats. And I thought maybe he was avoiding the new cats coming to the yard for food.

I have guilt about ignoring this behavior change. And in general, since he recovered from being sick in the summer with fluid in the lungs, he wanted to spend less time with me. At that time, he had to stay in the garage in the cat playpen for a week of treatment, which he liked less and less as he improved.

In January, since I was seeing him less, about once a week (or less), I checked on him inside the shed. He was in the heated cat house at each check and would run out of the shed.

He didn’t like being scared out of the shed and would not come near me for a proper evaluation. But he seemed okay enough from a short distance.

Then, we had a couple of “warmer” days where the temperatures were in the 30s (Fahrenheit). He was near the garage waiting for food in the morning along with Midnight and Porkchop, their usual routine.

I was super excited that he was outside and thought that must mean that he was feeling better! It was dark (before dawn), so I really couldn’t see him well, but he felt like he had lost weight when I petted him.

As it turned out, that would be the last time I would see Charcoal alive.

Just over a week later, I was shoveling paths in the snow from the cat shed to the feeding area and decided to check on Charcoal. And that’s when I found him dead in the cat shed.

My friend suprised me with a memorial gift to remember Charcal. It’s cat guardian angel solar light. (Amazon affiliate links – I will earn a commision if you click the link and make a purchase). 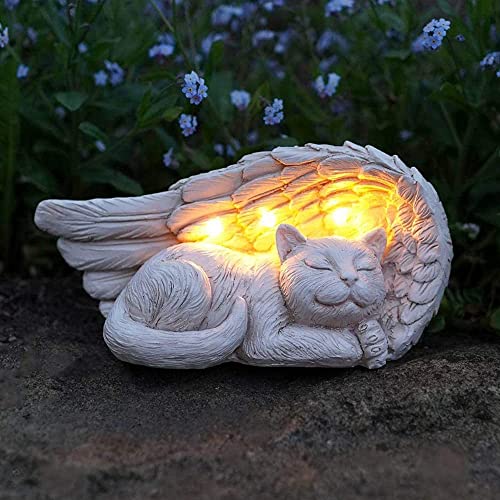 When the weather warms up we will place it on the deck. Charcoal liked to lounge on the deck in the sun.

Grieving the loss of my cat

Losing Charcaol was difficult. I felt like I could not stop crying after discovering his body.

His loss, while not completely unexcpeted after the routine changes and noticing that he was thin (as mentioned above), was still somewhat of a suprise.

He was the first outdoor cat that has died in the yard. Chloe, a very feral cat, died while recovering from a complicated surgery in the garage.

Charcoal was an older cat. While we don’t know his exact age, the vet estimated that he was older than ten at one of his first vet visits. Also, Charcoal had FIV, FeLV, and a heart murmur.

I also have to accept that even if I had taken him to a vet, that they may have recommended euthanasia. It could have been that this was his time to go.

We’ve had two indoor cats die so far, and their situations were very different. My cat Lina, died after a slow decline and I would say old age (she was nearly 18). And her littermate Kilala (at age 16), died after haivng thyriod disease for years.

The loss of a cat can effect people differently. Writing about my cat that died helps me while mourning.