This post contains affiliate links. If you click through and make a purchase, I may earn a commission.

A couple of weeks ago, we purchased a new couch. I had high hopes that the cats would not try to scratch it as they have many cardboard scratchers, posts, and cat towers.

My theory was that my cat’s scratching routines and habits were so strong that they would not be interested in the new couch.

But, at least three of of the cats have scratched the couch at least once.

Deterring the cats from scratching the couch steps

The cats have their reasons for wanting to scratch up that new couch!

Since my cats already have many acceptable scratching options, I believe they want the couch to smell like them.

Cats have scent glands in their paws. When the cat scratches something, some of its scent is left behind.

There are a few things you can try to deter your cat from scratching the couch.

Putting cat scratcher boxes and posts near the furniture may help.

I placed my cat’s favorite cardboard scratcher near the back corner of the couch. However, after two weeks, it’s barely been used!

And, I’ve heard at least one cat scratch that back corner of the couch.

It’s not a high-traffic area for the cats (best placement for cat scratchers usually). And, the couch still doesn’t smell like my cats, so it’s still alluring to them.

But just because it’s not working for my cats doesn’t mean it will not work for your cats. My sample size is limed to my current indoor cats.

I don’t believe there is a couch fabric that is 100% cat proof from all cats.

But some materials are probably going to be easier to discourage your cats from scratching than others.

We choose a fabric couch that is not tightly woven. It’s VERY easy for the cats to get their claws stuck in the fabric.

In retrospect, we didn’t consider the fabric type much when picking out the couch. A fabric couch was probably not the best choice.

So what is the best couch material for cats? The answer doesn’t seem straightforward.

Some sites recommend leather, while others say it’s a no-go for cats. Microfiber or very tight fabric (can’t see the threads) may be a better choice.

A material they can’t get their claws into at all may be the best such as metal or plastic. However, most people will want a couch that is comfortable for the humans sitting on it.

We are currently trying out the double-sided sticky tape on the corners of the couch. The idea behind the tape is that it’s super sticky, and the cats will not like how it feels on their paws.

We are using the Cat Training Tape, which you can click here to see on Amazon (there are many reviews and ratings). 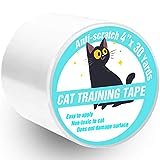 This particular tape was recommended to me by a reader of The Caturday Newsletter. She said it only took a week to discourage her cat from scratching the couch.

I found the tape a bit hard to remove from the backing. It took some patience!

The tape has been placed on the corners of the couch. I will update the post when I see how the cats respond to it.

I have a couple of concerns about the tape. Hopefully, these are fears that will not happen.

We are home most of the time, so I’m not too concerned about it, and hopefully, the cats will be trained soon, and the tape can be removed.

You can place blankets over the couch to prevent your cat from accessing the couch. There are also couch covers that may work.

You’ll want a fabric that is thick enough that your cat can’t scratch the couch through the cover.

Before I had the sticky tape mentioned above, I placed blankets on the corners of the couch, tucking them underneath the couch.

The problem was when the blanket was moved a bit, the cat used his claws on the couch again.

So unless you always what to keep your couch covered, covering it may not be the ideal long-term solution.

While researching solutions for preventing the cats from scratching the couch, I saw cat repellent sprays mentioned.

I will NOT be trying a spray. After reading the precautions, for Four Paws Keep Off, I do not feel it’s safe to use in my home.

Also, some of the reviewers say it smells horrible, and I am sensitive to smells. And “Avoid breathing spray mist. Wear goggles or face shield.” was not encouraging.

There are plastic shields that can be stuck onto your couch. Some of them also require using little tacks or pins to securely attach the shield.

The cat would not get the satisfaction of feeling its claws dig into the couch, but I wonder if it would discourage the cat. After all, they would still be leaving their scent behind.

The shields may need to stay on the couch long-term. On the positive side, they are clear and may not be that noticeable.

You can click here to see an example on Amazon and read through the reviews.

You may need to deter your cat from scratching up your couch or other furniture.

Training with sticky tape or using another method should help save your couch from the cat!